Rutgers University’s Center for American Women and Politics has announced the picture book IF I WERE PRESIDENT, by Catherine Stier and illustrated by DyAnne DiSalvo-Ryan, is this year’s selected book for their Teach A Girl to Lead project. 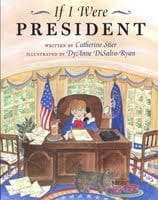 Approximately 2000 copies of the book, described as “a great story that teaches an important lesson about leadership,” have been purchased and distributed in to “each woman in Congress, the women serving in all state legislatures, and four women governors” as stated on the Teach a Girl to Lead website at http://tag.rutgers.edu/teaching-toolbox/reading-day-if-i-were-president/

These elected women leaders are encouraged to share the book and discuss leadership issues with groups of children in their districts, and then donate the books to the school or organization at which they appear.  And they have!  New York State Senator Elaine Phillips, Hawaii State Representative Nadine Nakamura and Florida State Representative Tracie Davis are just some of the elected leaders who have shared IF I WERE PRESIDENT with children to date.

I am very proud that these women leaders are reading and discussing my book. I hope that its portrayal of both young boys and girls imagining themselves as POTUS will encourage all children to consider a possible future in positions of leadership.