For every book, there is a story of how it came to be. Here are a few of those stories…

The Story of The President and Voting Books 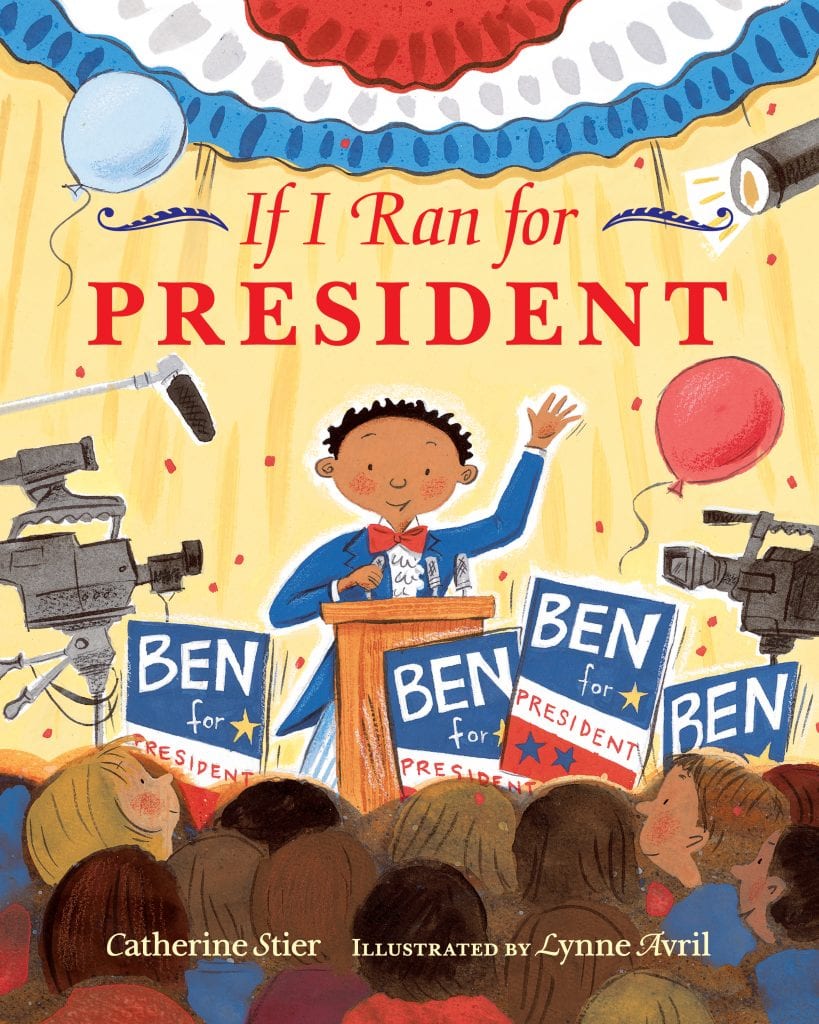 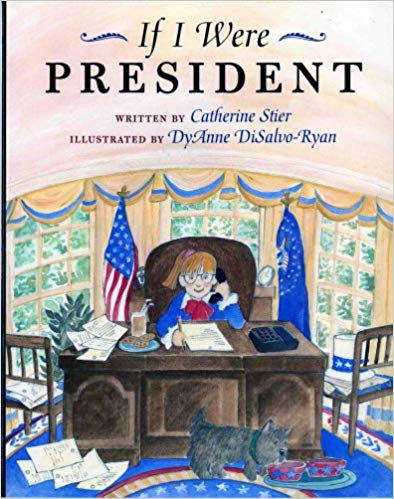 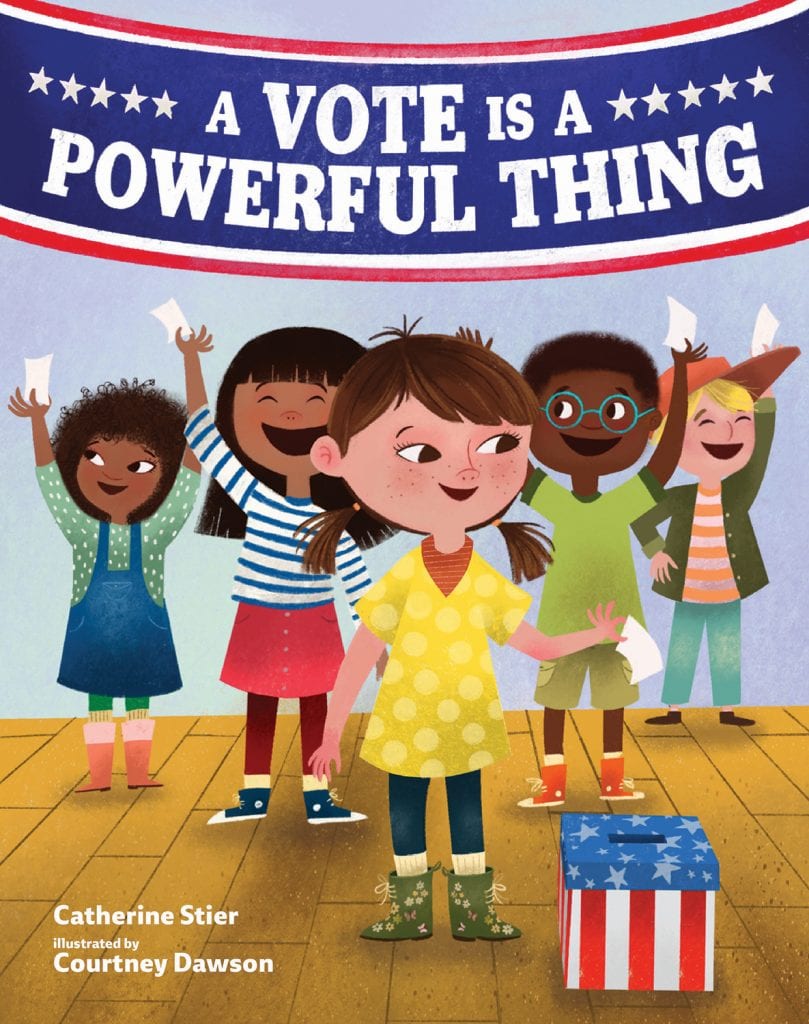 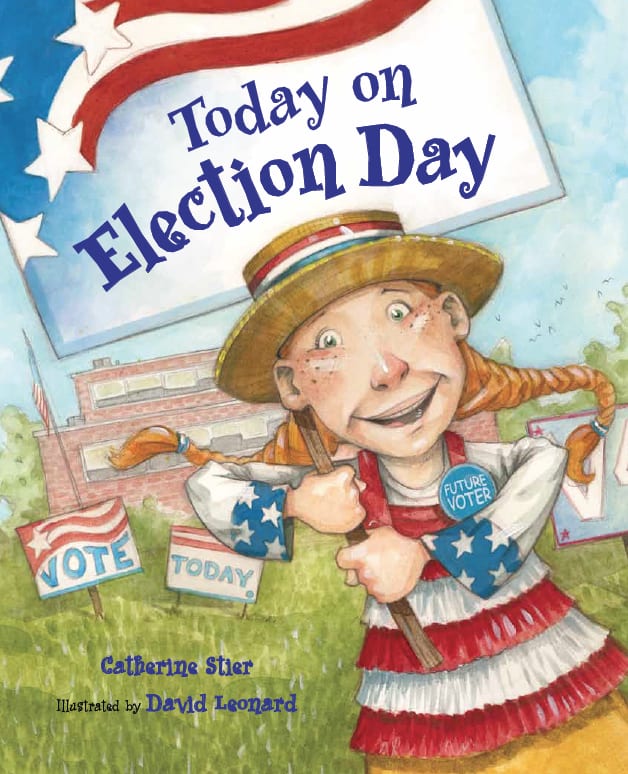 “A proudly buoyant tour of Election Day in the U.S.A.”—Kirkus Reviews

Years ago as a young mom, I worked at a YMCA preschool program. For Presidents’ Day, I sought a timely book to read to my class – but could not find one that explained the presidency for very young kids. So I wrote one.

Published in 1999, IF I WERE PRESIDENT (Albert Whitman & Company, illustrated by DyAnne DiSalvo-Ryan) won awards, became a classroom classic and was even featured on the WGN-TV Bozo Show.

During my school author visits, I found that kids had fun pretending to be the president, but also enjoyed pretending to run for president, – so that became the subject of a new book, IF I RAN FOR PRESIDENT (Albert Whitman & Company, illustrated by Lynne Avril).

One summer, I accepted an invitation to conduct a books signing at Mount Rushmore National Memorial for their Independence Day celebration. More than 20,000 people visited the park that day. I met people from all over the country, and at night there was an amazing fireworks display. Later, I signed books at the museum shop of the Smithsonian National Museum of American History.

My third book came about in a different way. My kids’ school served as a polling place, a place where citizens come to vote on Election Day, and I volunteered at a library where early voting took place. I wondered what the kids at schools and libraries thought as they saw the election signs, and the people streaming in to vote.  I decided to write TODAY ON ELECTION DAY (Albert Whitman & Company, illustrated by David Leonard) to explain a bit about voting and all that happens on Election Day in the United States.

Finally, A VOTE IS A POWERFUL THING the newest book in this series, was inspired in part by my volunteer work with nature programs at a wilderness park. I’m proud to say that this book earned my first School Library Journal starred review! 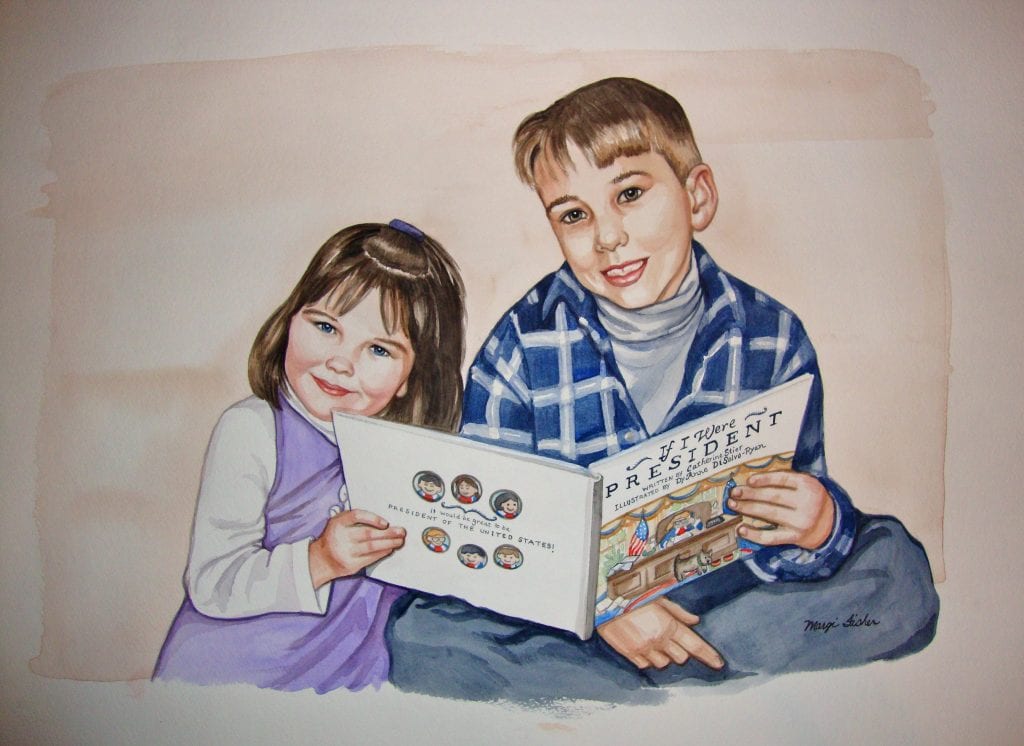 A painting of my own kids, reading my first book. Watercolor portrait by San Antonio Artist Margi Fisher. 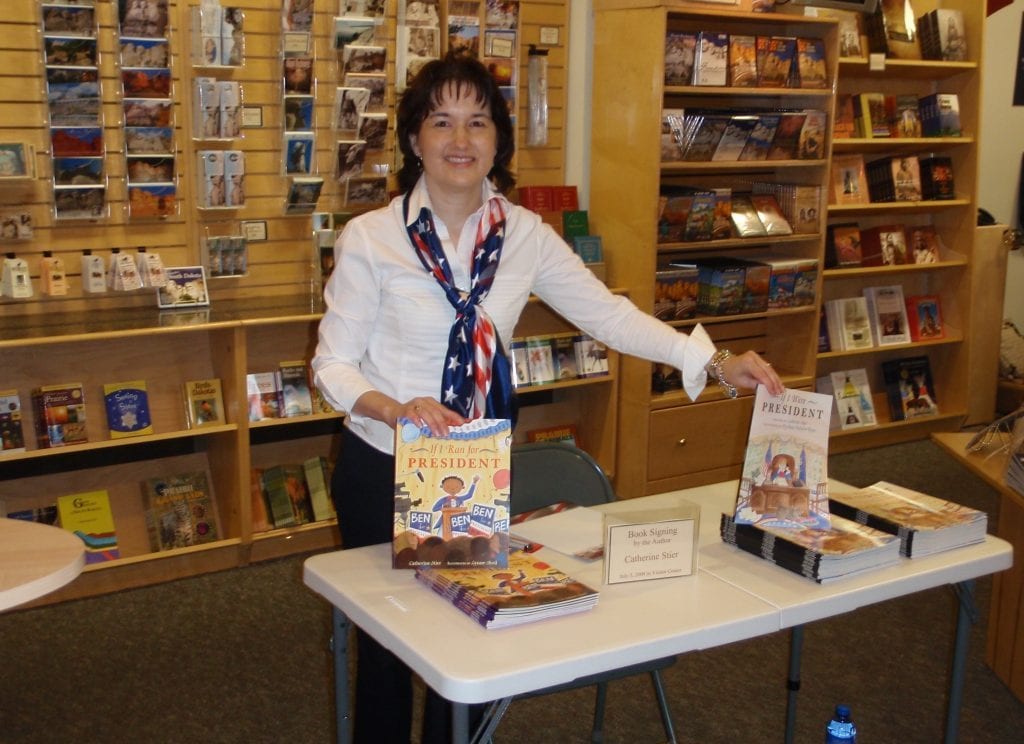 The Story of The Bug Books 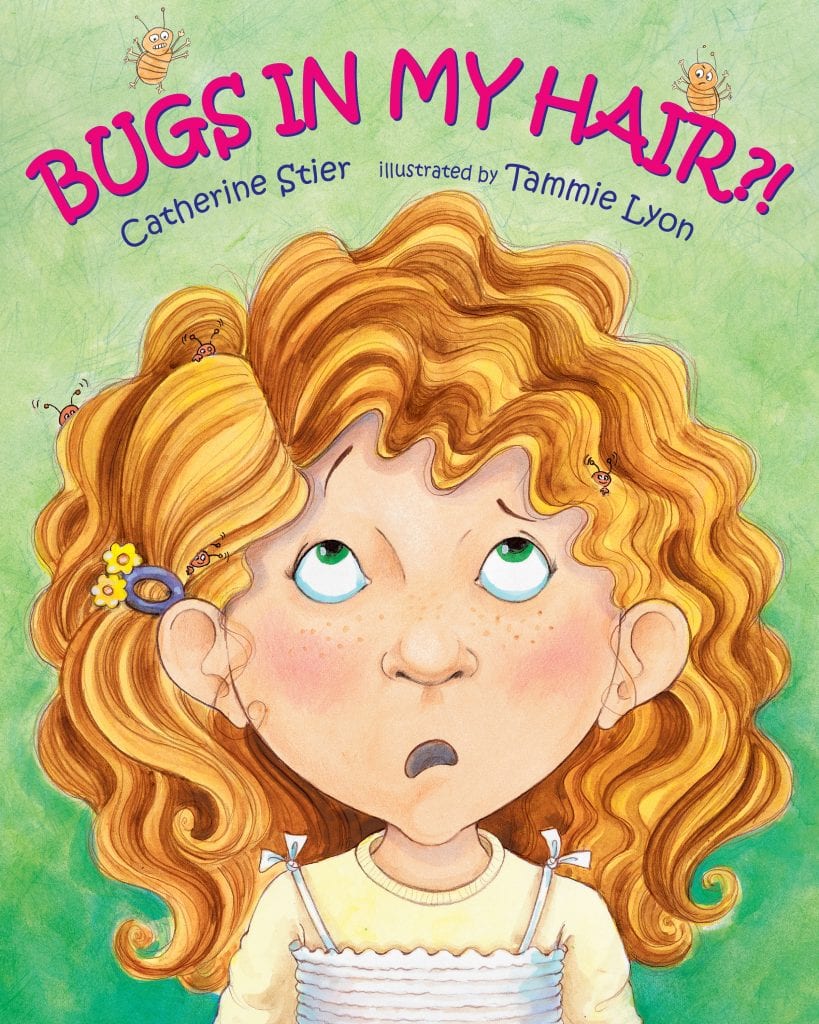 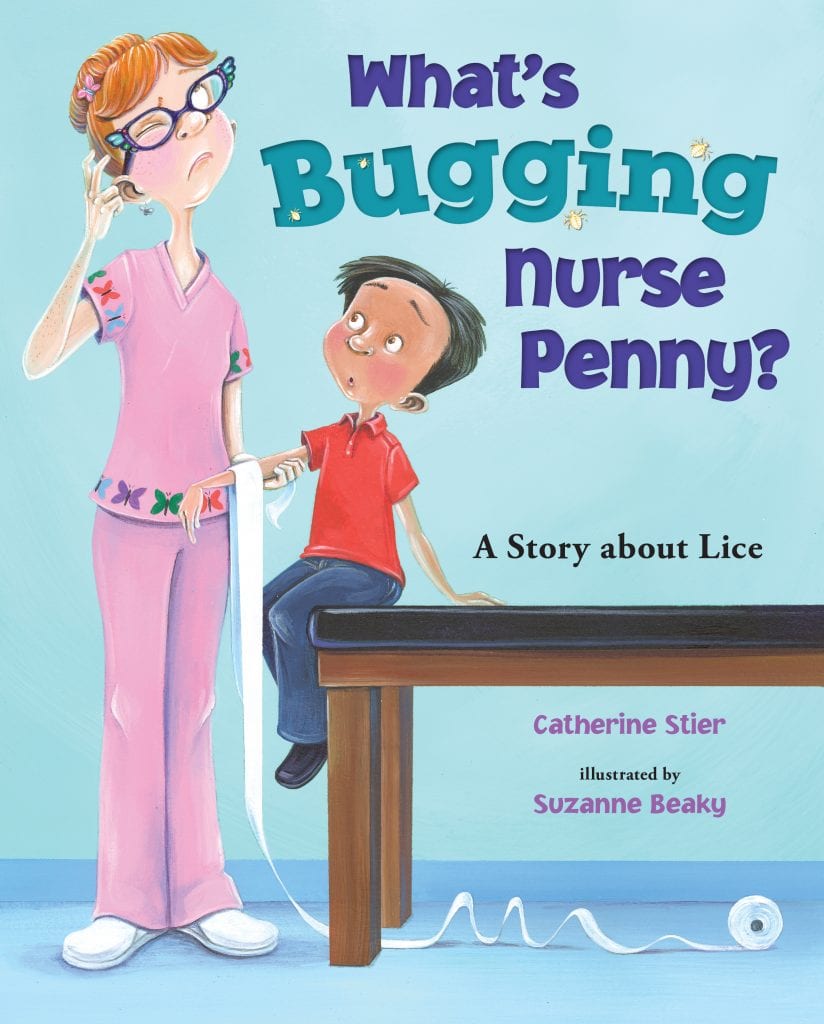 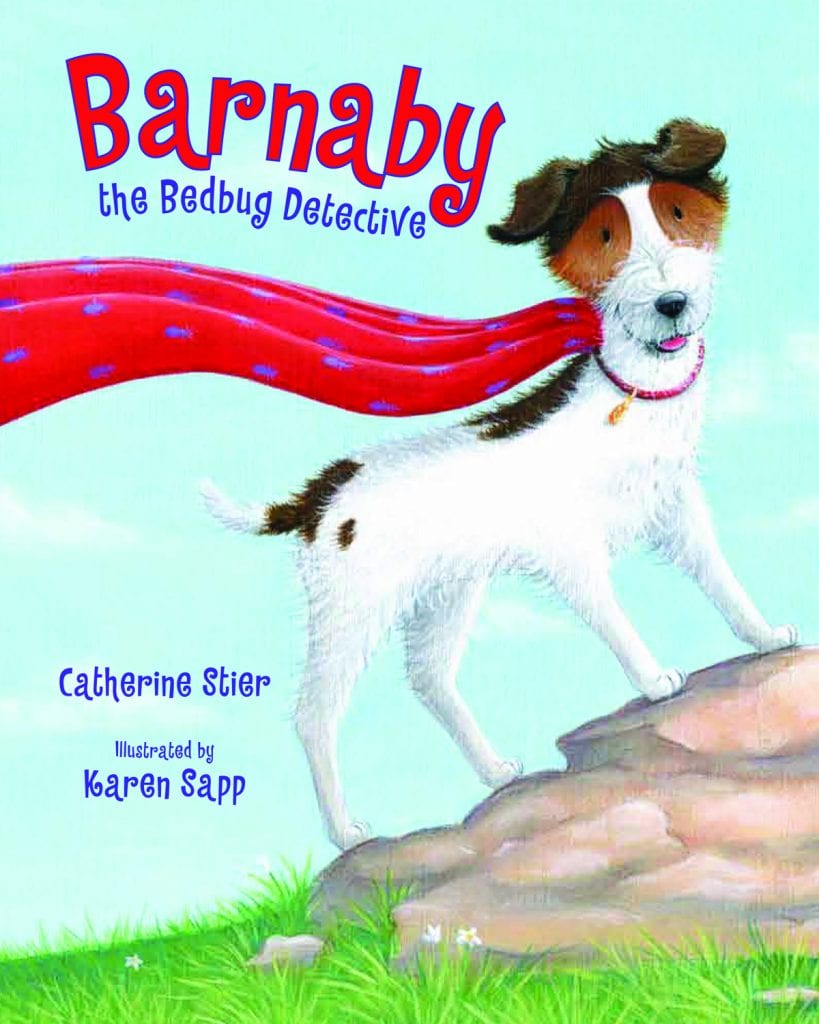 At book signings for BUGS IN MY HAIR?! (Albert Whitman & Company, illustrated by Tammie Lyon) I met people excited to give that book to their school nurse.  This, along with an editor’s suggestion, was the inspiration for WHAT’S BUGGING NURSE PENNY? (Albert Whitman & Company, illustrated by Suzanne Beaky) – a book about a fun and funky school nurse.

Here are some facts I learned about Lice while researching these books:

While researching BARNABY THE BEDBUG DETECTIVE (Albert Whitman & Company, illustrated by Karen Sapp), I had the chance to meet a scrappy, real-life bedbug detective dog – Bernie!  He lives in Texas and his photo appears at back of the book.

Here are some facts about bedbugs I learned while working on this book: 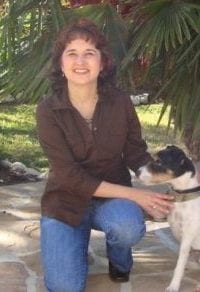 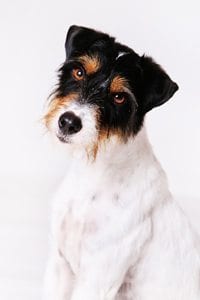 The Story of the WWII Historical Fiction Book 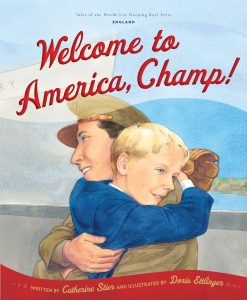 Imagine a huge ship crowded to the brim with young women, babies and toddlers, all heading to a brand new life in a faraway country!

I was fascinated to learn about the amazing journeys made by thousands of WWII war brides (and their children) from more than 50 countries. These women from Europe, Australia and other regions left their homelands after WWII to reunite with the American servicemen they had married during that terrible conflict. Sometimes, these young couples had already started families.

In many cases, the young brides at first had to stay in their home countries while their husbands returned to the U.S. But finally, great ships were readied to bring these women and children across the sea on special voyages nicknamed “GI Bride Ships” or “Operation Diaper Run.”

WELCOME TO AMERICA, CHAMP! takes place, in part during one of these voyages on the majestic ship, the Queen Mary.  I visited the Queen Mary as I prepared to write this book. The Queen Mary no longer sails the seas, but has been converted into a hotel and attraction in Long Beach California.

How exiting it was for me, then, to conduct a book signing on the Queen Mary, and later return as a guest of the WWII War Brides Association Reunion, held on the very ship that had first brought some of the women to the U.S. so many years ago. 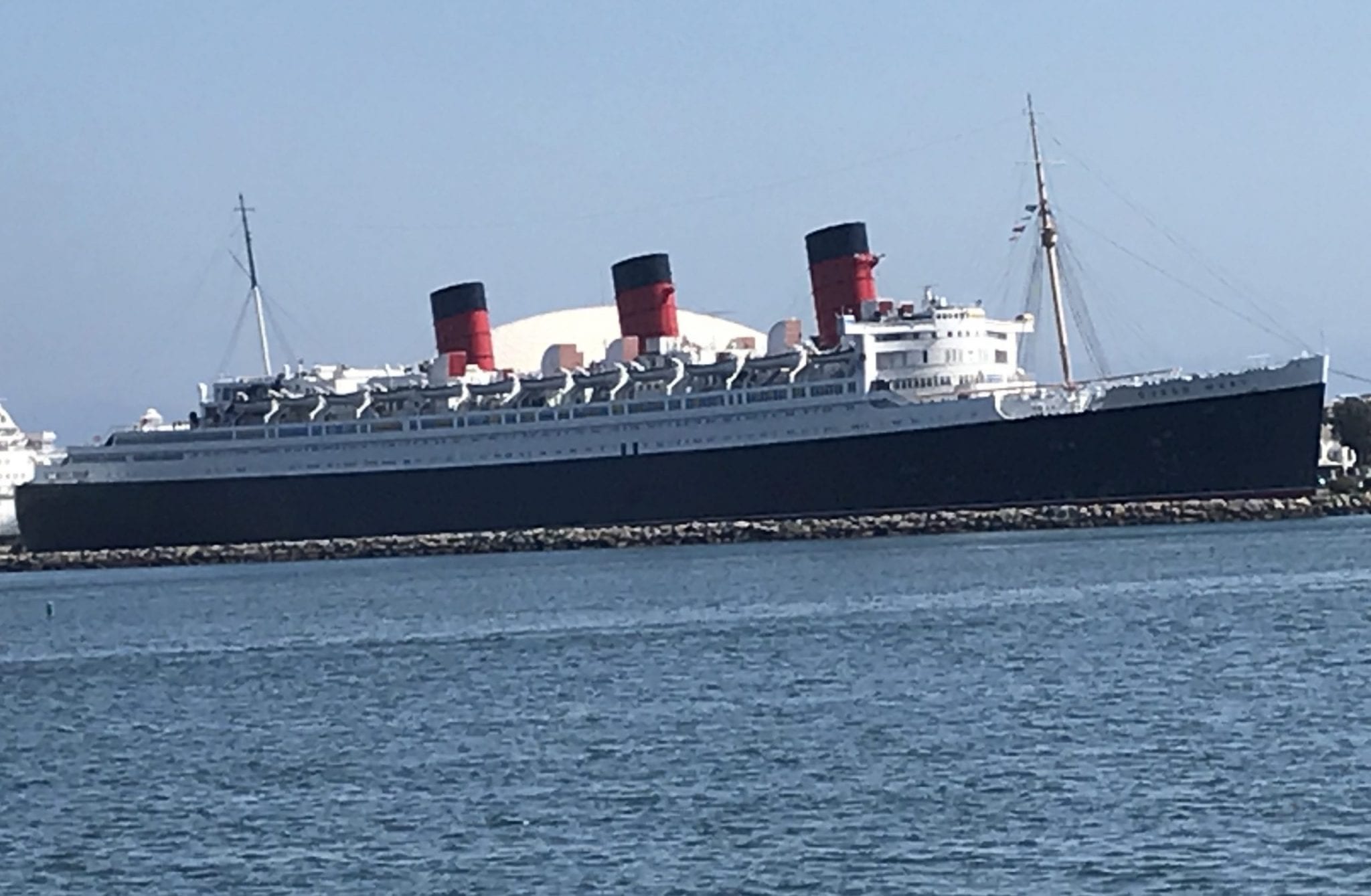 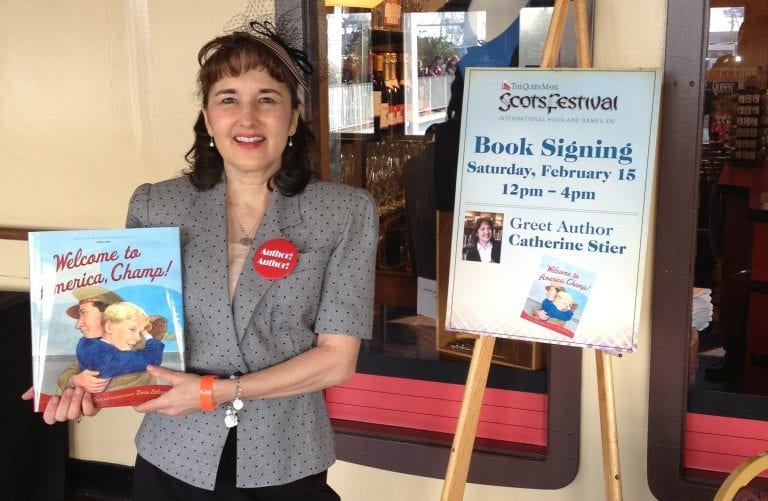 Author event on the Queen Mary

The Story of Terrible Secrets of the Tell-All Club 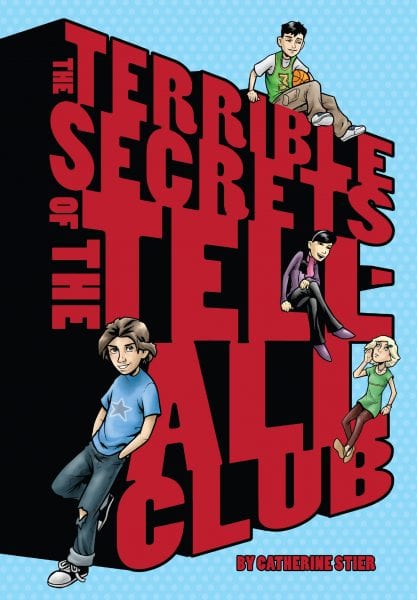 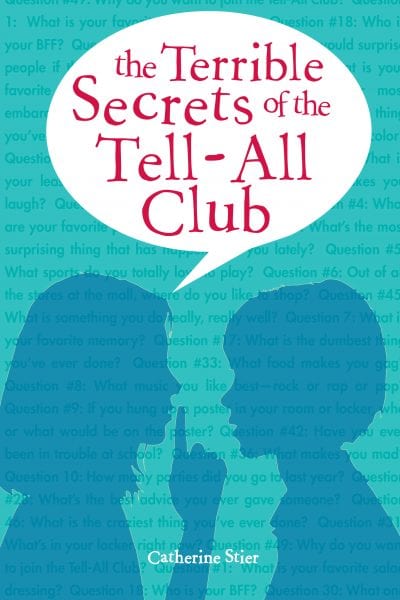 Part of THE TERRIBLE SECRETS OF THE TELL-ALL CLUB is set at a sleep-away, “Outdoor Education” camp program that takes place during the school year.  For most of the fifth graders in the book, the camp trip is the best part of the whole year!  I attended a camp just like it – Mill Lake Camp in Michigan – in the sixth grade.  Some of my memories of this camp are part of this story.  Just like the fifth graders in this book, we all stayed in bunks in cabins.  And we all had to learn to square dance for the big dance that took place one night!  Our superintendent was the square dance “caller” who told us when to “Do-si-do.”  I remember that we could either choose our partner or (yikes!) be paired up with someone. 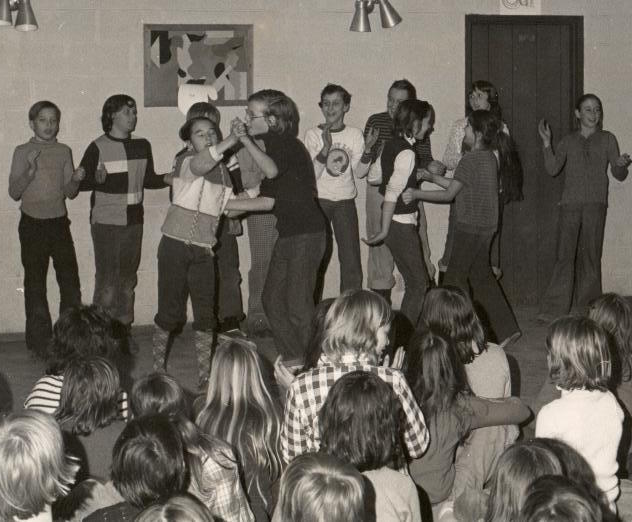 A skit my group performed at my sixth grade camp. I am the girl in the sweater with the braid design, dancing with my eyes closed.