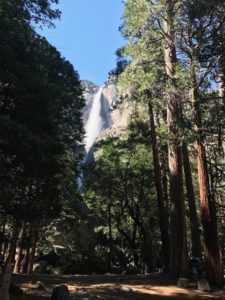 Enamored with the experience of past visits to our National Parks (including the Grand Canyon, the Grand Tetons and Yellowstone), I jumped at the chance to tack on a three-night stay at Yosemite National Park to a previously planned California trip.

As anticipated, I found at Yosemite stunning natural beauty, but also something especially heartening to a writer: again and again, the power of story and the written word were the subtext of the presentations, performances and exhibits that showcased the wonders of this place. And as I would learn, the power of the pen as wielded by some individuals even accounted for the park’s very existence.

But first, a few words about this amazing place. Perhaps one of Yosemite’s unexpected and certainly less celebrated charms in a park that draws adrenaline-fueled climbers is the accessibility for all ages and abilities to remarkable vistas. Even the roads, lodgings and shuttle stops offer incredible views. One may watch the thundering, 2,425 feet tall Yosemite Falls from the grounds of the Yosemite Valley Lodge, and gaze at what park brochures describe as a “massive granite monolith,” the imposing El Capitan, from shuttles buses and road – no hiking required.

A good place to gain an overview at most National Parks is the visitor’s center, and Yosemite is no exception. The Valley Visitor’s Center located in Yosemite Village offers exhibits of the history, geology, flora and fauna of the area. It also houses a tribute to John Muir (1838-1914), with a life-sized, bronze statue of the famous writer and 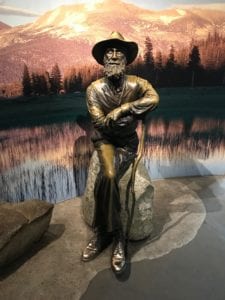 activist. A fierce advocate of natural places, Muir’s magazine articles and other writings won him supporters (among them Theodore Roosevelt) and were vital to the formation and preservation of national parks, including Yosemite.

As writers, we may contemplate our ideal writing space or conditions. It was enlightening, then, to read at this exhibit Muir’s own words describing what he endured in a home he had built in 1871 in Yosemite. Some called his birdhouse-like structure tacked onto the front of a mill “the hang nest because it seems unsupported” and he observed:

“It’s hard to write here, as the mill jars so much by the stroke of the saw and the rain drips from the roof, and I have to set the log every few minutes…”

However, in writing about the beauty he found in Yosemite, Muir also mused “…what pen may write my blessings.”

The Valley Visitor’s Center also houses a bookstore with a selection of children’s book, among them the award-winning title THE CAMPING TRIP THAT CHANGED AMERICA: THEODORE ROOSEVELT, JOHN MUIR AND OUR NATIONAL PARKS by Barb Rosenstock and illustrated by Mordicai Gerenstein. The story relates how, for three nights and four days in 1903, Muir led then-President Roosevelt on an exploration and camping trip throughout Yosemite. The adventure affected Roosevelt deeply and led him to take actions that ensured the preservation of natural parks and sanctuaries. 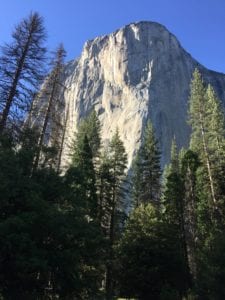 Since our stay was so brief and the park so vast (1,169 square miles), my traveling companion and I decided to check out the organized tours and activities at the park. Our first was the Yosemite Valley Floor Tour (fee and ticket required). With daytime temperatures in the high 80s that week, we chose the 6 p.m. departure time, and clambered into the open-air tram that departed from the Yosemite Valley Lodge. Since traffic can be a problem during the peak tourist season, I highly recommend this engaging tour that winds through 26 miles of the park in about two hours, often utilizing official road lanes not available to tourists.

Here again the story theme surfaced when our guide, the charismatic Park Ranger K, invited us to “Read the landscape like a manuscript.” He encouraged us to notice how the trees, rock, cliffs and water revealed much about the park and its origins.

Later in the tour, Ranger K proved to be a musician and singer. At a scenic overlook, he pulled out a banjo and played, among other selections, Pete Seeger’s Long May the World Go. Ranger K encouraged us all to sing along, and joyfully we did.

Another ticketed event, the “Starry Night Skies Over Yosemite” 9 p.m. program, proved most enjoyable as well.   That night, our band of stargazers trekked through the darkening night to our destination – a field spread with tarps. There, our guide encouraged us to lie down and consider how people throughout the ages might gaze up just as we were, at what she described as “the greatest picture book ever.” With a laser-light type device (it resembled Dr. Who’s sonic screwdriver), our guide pointed out specific stars and planets and outlined constellations. For the next peaceful hour or so, we listened to both stories and facts about the points of light sprinkled throughout the blackness above us. 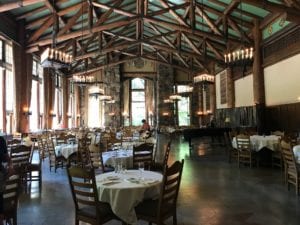 On our final day, after an afternoon spent hiking near El Capitan’s base, we took a shuttle to the Majestic Yosemite Hotel (formerly the Ahwahnee Hotel) for another guided (but this time free) tour of this elegantly rustic hotel opened in 1927. It was not long into the tour before literary connections to this historic building emerged. On leading us inside the spacious and grand dining room, our guide observed that past guests had commented on its resemblance to the Great Hall of Hogwarts. And indeed, the long, rectangular room is enclosed with stonewalls and set with a large window at the room’s far end, similar to the dining hall of the Harry Potter films. White candles even float above the tables – though here they are electric candles firmly secured to rustic chandeliers. Rowling’s works weren’t the only books referenced. We were told that the hotel lobby inspired the set design of The 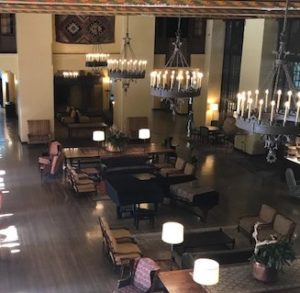 Lobby of the Majestic Yosemite Hotel

Shining, the Stanley Kubrick film based on Stephen King’s hotel horror novel. Our guide produced a still from the film that illuminated how many of the Majestic’s features mirrored those of the fictional Overlook Hotel lobby in the film, including the wood flooring, the large fireplace, the chandeliers, the beamed ceiling, the second floor railings and even the arrangement of the furniture (Note – a different hotel was used for shots of the Overlook Hotel’s exterior).

At the tour’s conclusion, our guide led us to the former writing room, now the mural room, tucked off the main lobby. Here we learned about another formidable figure in Yosemite’s history, Stephen T. Mather (1867-1930). According to our guide, Mather came to his position in a most interesting way. After spending time in Yosemite in 1914, he wrote the Secretary of the Interior, college friend Franklin Lane, to lament the conditions he found there. Lane told him that if he thought he could do better, he should come to Washington D.C. and tackle the job himself. He did. Mather’s efforts contributed to the creation by Congress of the National Park Service in 1916 and he became the National Parks Director in 1917.

We were told that, in fact, this hotel was Mather’s idea. He hoped a luxurious resort hotel would coax to the park moneyed and influential people who would not only enjoy their stay but become Yosemite’s longtime fans and supporters.   On one occasion, Mather made a rousing speech to a group of movers and shakers gathered at the hotel, 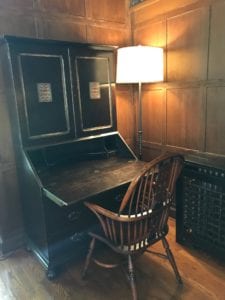 then led them to this writing room so they might take up a pen to extoll the wonders of the park to others.

There still remains in this room a pair of small writing desks from that era. It was thrilling to consider that perhaps a letter composed here changed minds and awakened hearts to the importance of protecting this precious park.

Yosemite National Park offers research opportunities/experiences that may be especially meaningful to writers exploring particular subjects or settings. Here are just a sampling (please note that programs may have changed or may be seasonal and some may require a fee):

Wildlife of Yosemite – Ranger or naturalist programs about bears and other wildlife. Check the Yosemite Guide* for scheduled times

* The Yosemite Guide is available in print at the park and online at https://www.nps.gov/yose/planyourvisit/guide.htm